Pablo Medina was born in Cuba and moved to New York City at the age of 12. He was educated by the Jesuits and thought about entering the order but then he discovered girls, who took him out of the straight and narrow and showed him the intricate steps of the dance of romance. He started writing poetry as a way of impressing members of the opposite gender and has revolved around the twin stars of literature and sex ever since. He has published 13 books of poetry, fiction, nonfiction, and translation and is determined to publish his next book as soon as he can in order to get away from that nasty number. 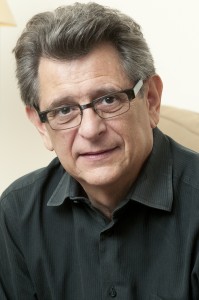 García Márquez has said that if you are not religious, you better be superstitious, or something to that effect. His most recent books include the poetry collection The Man Who Wrote on Water and the novel Cubop City Blues. He doesn’t understand why more people don’t read poetry (especially aloud). They miss out on a great and salutary practice. He loves the laughter of old people and the eyes of infants. He loves movies and the obscure questions of existence. How many angels can fit on the head of a penis? How many musical scales does a coelacanth have? Is it true that God eats thirty-three-and-a-half lady fingers in one sitting?

Medina‘s work has appeared in magazines and journals worldwide and been translated into several languages. He has received fellowships from the Oscar B. Cintas Foundation, the state arts councils of New Jersey and Pennsylvania, the National Endowment for the Arts, the Rockefeller Foundation, and the John Simon Guggenheim Memorial Foundation. He has made his living as a teacher, and while he loves the practice, he hates the classroom, that little box “made of ticky-tacky”, especially if it lacks windows through which teacher and students might look and daydream and wonder at the grandness of the world. Currently, he lives in Boston, in an exile surrounded by icicles, and is professor in the Department of Writing, Literature and Publishing at Emerson College.